The story behind the Sonic the Hedgehog movie is, in its way, more interesting than the story of the film itself. About a year ago the first trailer dropped, revealing the film’s design for the title character. It should be noted that Sonic is one of the top-draw characters of video-game history. His games are not what they were, but he was one of the big names of the medium’s early heyday, a rival to Mario himself. Everyone of that generation, even though who haven’t played the games, knows Sonic: if Mario is gaming’s Superman, Sonic is its Spider-Man.

So, the trailer dropped, and this was the design they had:

He looks like someone stuffed an emaciated child into a furry onesie and then CGed a piece of bad fan art over his face. It’s as if they weren’t working off of the games so much as off of a cheap live show version of the character.

The backlash was, unsurprisingly, intense. Even the original designer of Sonic said he thought it looked awful.  It was to the point that only a few days later the director, Jeff Fowler, took to Twitter to announce that they were going to re-do the entire design from the ground up, pushing the film back from its original November release date to do all the effects over again.

This was the result: 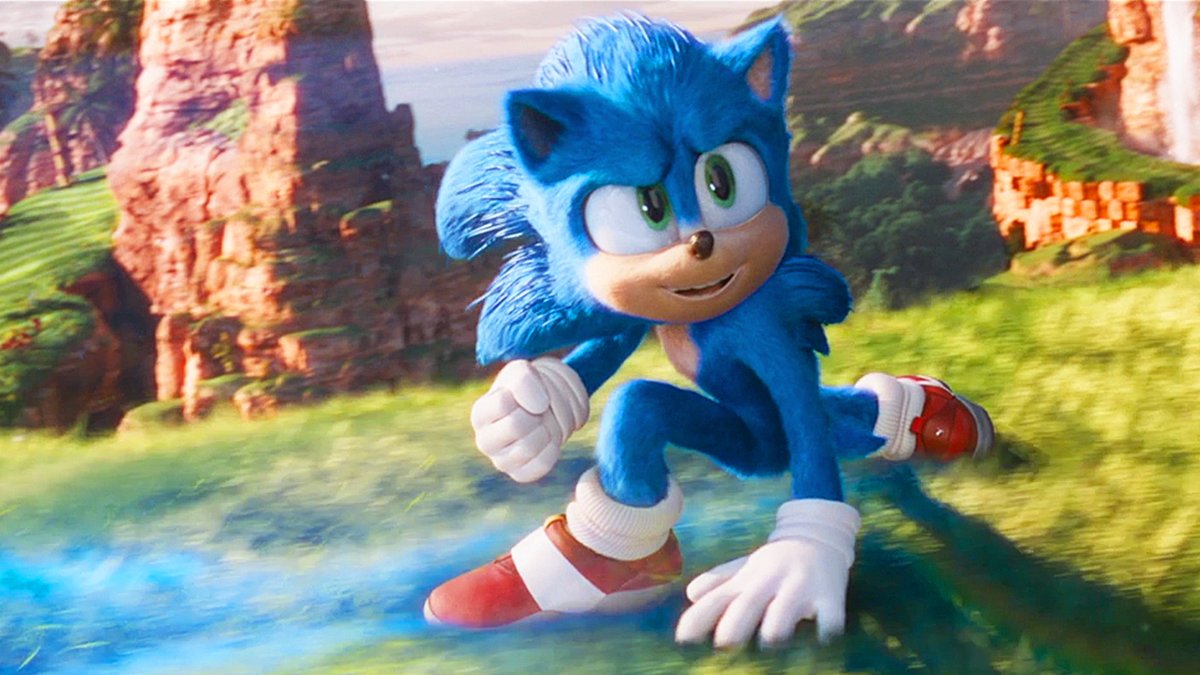 Not only is he now about a thousand times cuter and more charming, but it’s also much, much closer to the Sonic that people know and love. You look at the original and you see a strange variation on Sonic. You look at this guy, and you just see Sonic.

But with that taken care of, what about the film itself?

Having just seen it, I can say that I liked it quite a bit. It’s very light, has some extremely glaring gaps in logic, and Sonic’s powers are about as consistent as the average politician’s moral convictions, but it was a very sweet, wholesome kind of film just bursting with goodwill.

One thing that stood out was that the filmmakers very clearly cared about this character. The film is littered with nods and references to the games, from the sound effects to some of Sonic’s mannerisms. The prologue even has him being attack by red echidnas, promising an appearance by Knuckles in a future film (my favorite, being a Nintendo fan, is when Sonic comments on how much he hates mushrooms). More to the point, the filmmakers actually seem to have taken the time to think out what Sonic’s personality is. His essential kindness is established right off the bat, where he saves a turtle crossing the road then, thinking how sad it must be to always have to go slow, takes it on a wild ride to show how exhilarating speed can be. That right there is perfect Sonic; he’s an adrenaline junkie who just loves to go fast, and who, for all his cockiness, genuinely cares about others.

One moment that stood out to me was an early  scene where the extent of his loneliness comes in on him and he expresses his frustration by running as fast as he can. That, it seems to me, is how Sonic would burn off anger; pushing himself to go faster and faster. The bit  leading up to it is very nicely done, playing off of the early gags of Sonic using his speed to pretend he has friends, but suddenly finding that actual human contact – the one thing he really wants – something he can’t give himself, no matter how fast he can run. I also like that the film maintains Sonic’s habit of talking to himself through much of its run time, keeping us aware of his isolation.

Sonic’s presented here as kind of a hyperactive kid; not quite the ‘hedgehog with attitude’ that we know from other sources, but clearly poised to grow into it, and I think it’s certainly an acceptable variation on the character, from what I know of him.

As for the villain, Jim Carey is still not my first choice for Robotnik (I would have gone with Nick Offerman), but again, the film hits his character pretty well and makes him a suitable counterpart to Sonic. Where Sonic is free-spirited and longs to connect with people, Robotnik despises people and prefers his machines, which do as they are told and are never unpredictable or illogical. This fits nicely with the franchise’s motif of live, active animals pitted against cold, crushing technology. Carey is clearly having a blast in the role, hearkening back to his heyday in the 90s (coincidentally, also the time of Sonic’s peak popularity, as I recall), and to be honest, his eccentric, over-the-top arrogance does fit with Robotnik, as I understand him(his boasting and arrogance gives the film plenty of chances to flesh out his character without coming to screeching halt). He’s not nearly fat enough (though the ‘Eggman’ moniker is used in the film, and in a way that makes sense), but he grows into the role, so that like Sonic, by the end of the film he is recognizably the Eggman from the games. And to be honest, seeing these two face off on the big screen after so many years actually did feel like a big deal. The climactic showdown captured the particular tone of their rivalry very well.

The film is structured as an origin story of sorts, showing Sonic growing from basically a runaway living in isolation to the hero we know from the games and other adaptations. He learns his spin-dash, discovers chili dogs, gets his red shoes, and, significantly, learns that he can use his powers for more than just running away. Again, this all feels very appropriate for Sonic. Is it the best possible story they could have told with him? Probably not, but it’s a story that works with his character. The climactic line (heard in the trailers, so it’s not a spoiler) “This is my power, and I am using it to protect my friends,” is a pretty good summation of who Sonic is.

Sonic teams up with James Marsden as a small-town cop who feels unfulfilled with his safe, comfortable small-town life and has tentative ambitions of being a San Francisco cop. He also talks to donuts (“…and eats them if they get out of line”), which I thought was a fun twist on an old cliche. He’s happily married to a very supportive and affectionate wife, and it’s refreshingly charming to see such a patently successful marriage in a family film and not to have any trite ‘relationship crisis’ moments (the only obstacle is her sister, who inexplicably hates him, but whom no one pays attention to. She’s a comedic element that your mileage will probably vary on, but she doesn’t have a lot of screen time). Moreover, their easy-going, familiar relationship, along with the equally easy-going small-town life we see in Green Hills, gives context both to Sonic’s loneliness and Robotnik’s misanthropy. It was vital for this film to have happy connections among its supporting cast to emphasize the plight of its hero. And really, it just warms my heart to have a major Hollywood film championing small town, rural life and happy, mutually supportive marriages over cities, technology, and shrieking misandric single women.

I was impressed by the action scenes, which make full use of Sonic’s speed for some high-adrenaline chases and rapid-fire battles. The climactic chase in particular, with Sonic racing from location to location, dodging Robotnik’s attacks, is exactly the kind of thing you want to see in a movie like this (and for once leaping to famous landmarks actually makes sense, given how the rings work).

I do have to dock points for how inconsistent Sonic’s powers are; his speed basically lets him do anything the script needs at the moment, but not anything it doesn’t need. At one point during a bar fight he runs around the room causing chaos while everyone else is standing completely still. Earlier on, he got shot with a tranq dart because he was caught off guard. Another time he runs from Montana to the Pacific Ocean and back in about ten seconds. When he needs to get to the top of a tall building, why can’t he just run up the side? The climax manages to pull a convenience to allow Robotnik to keep up with him, but it’s still a bit much. Likewise it’s unclear why Sonic gets his heroic second wind in the finale; was it really just the power of friendship (it is magic, after all)? Logic is not this film’s strong suit, so take that for what it’s worth.

Likewise there are a number of plot threads that just kind of fall off at the end. It’s not hard to make surmises about them, but a few throwaway lines or scenes might have helped; like while Robotnik is fighting Sonic, why not have a quick bit of the government trying to reign him in and being ignored to explain why they were so willing to drop the whole thing at the end? Little things like that would have made the film stronger.

As it is, though, I think ‘light, wholesome fun’ sums it up. All I asked of this film was that it be enjoyable and not be morally offensive. That’s a low bar, but so few movies manage to clear it these days. This one soared over it with flying colors (the worst content, as I recall, are a fart joke and a single cut-off swear word). Not great, but worth the time.

The film, and the story behind it, also gives the lie to the idea that fans are impossible to please. When the redesign came out, fans absolutely fell in love with it and the film went from a sure-fire flop to an expected hit. For the most part, I think, fans want to love things associate with the characters and stories they love. Give them just a little understanding, a little good-will, show that you care about the thing they care about, and they will appreciate it. After seeing the writers of Star Wars and the DCEU seemingly going out of their way to belittle and ‘improve on’ the very thing they are supposed to be honoring, basic care and respect come to seem precious.

Between this and Detective Pikachu, I can only hope we are the dawn of a new era for video-game movies, which have had a notoriously bad track record for a long time. But these two films show that they can work, at least when the filmmakers actually care about them. Onward and upwards for Sega and Nintendo!

P.S. Definitely stay for the credits. This is one film I really hope gets a sequel.

One thought on “Thoughts on ‘Sonic the Hedgehog’”