So, my sister, Masha, has nominated me for “Very Inspiring Blogger Award,” which is surprising and very gratifying. 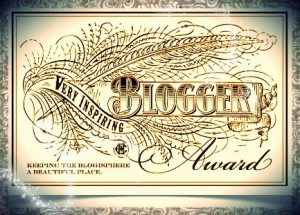 First is my friend EG Norton, who is sincerely one of the most interesting people I know and who has operated several marvelous blogs over the years and currently blogs at The Martial Theologian. She doesn’t write very regularly, but she’s always worth reading when she does!

Next is my friend Teresa, who blogs at Daughter of Judith, but who hasn’t written much lately due to personal issues. This is to say that your patience and continued concern for others inspire me!