The concept of authority has been on my mind quite a lot lately. There’s a whole lot to delve into there, especially since it’s a subject we moderns tend not to understand very well. We tend to think of it as either consented rule (which would make it synonymous with ‘counsel’ or ’employment’) or oppression. In fact, authority means the power to impose a moral obligation on someone to obey. A father, for instance, imposes bedtime by his authority; his child is obliged to obey whether he wants to or not. Likewise, if I own a book, and you try to take it, I can, by my authority as its owner, order you to return it and thereby impose a moral obligation on you to do so, whether you wish to or not. Even in our own, liberal society, a substantial part of the electorate explicitly does not ‘consent’ to rule by the President, yet (for now) we generally accept that they nevertheless have a moral obligation to follow his leadership and not try to set up their own, separate government.

Now, with regards to the Passion of Our Lord, remember that Christ stands in place of mankind; in place of sinners. Therefore, it was necessary, as I understand it, for Him to be condemned by people who, humanly speaking, had the authority to so condemn Him. Had He been stoned, as St. Stephen, there would have been no ‘reparation’ on behalf of mankind; no connection between Christ’s sufferings and the guilt of humanity. Mob murder by those who do not have the right of judgement is only a crime, with no moral implications for those who are not involved. St. Paul was complicit with Stephen’s martyrdom since he was there, but Pilate wasn’t.

Who has authority? First of all, the high priest, whose duty it is to represent God to the people and the people to God. The Mosaic priesthood, centered around the Temple and descending from Aaron, was at the time the voice of God upon earth. It was the legitimate, true means of rendering Him worship and of speaking His word (corrupted and stagnant though it had become; Christ Himself reminded His hearers that the Pharisees “sit upon the throne of Moses” and so the people were to “do and observe all they tell you” (Matthew 23: 1-3). The authority remains, even in the hands of bad actors (as indeed is shown by the fact that the priesthood even remains after setting up idols in the Temple back in the days before the exile). Thus, Christ is first tried by Caiaphas and the elders, who condemn Him for blasphemy because He claims to be the Son of God and ‘makes Himself equal to God’ (keep that in mind). They have the right to condemn Him, though they obviously are not right to do so.

However, as Caiaphas says to Pilate, they don’t have the right to execute Him, under Roman law, and so they go from the Temple to the praetorium; the seat of the Roman governor. From ecclesiastical authority to secular authority. Note also that, while Caiaphas can condemn Christ as a blasphemer and cast Him out of the Temple, he cannot take His earthly life. That power rests in the secular, earthly authority of Caesar, represented by Pilate.

Here is something interesting (to me at least). Rome rules Judea, and indeed the whole world. But is that authority legitimate, given that they are an occupying foreign power? The answer to that comes when Pilate tries to evade the issue by sending Jesus to Herod: the subordinate ruler of Galilee and (as I understand it) the present claimant to the throne of David. Herod, however, declines his authority by sending Him back to Pilate, and Christ seems to deny it as well by refusing to speak with him (He does speak with Pilate, at least a little). There is no legitimate authority left in that throne.

The authority of Rome is then further confirmed in that most unfortunate outburst of the priests: “we have no king but Caesar.” In their zeal to kill Jesus, they deny God in favor of secular authority.

Thus it falls to Rome, the legitimate representative of Man on Earth, to condemn the Son of Man. Indeed, Christ Himself acknowledges that authority: “thou shouldst not have any power against me unless it were given thee from above” (John 19: 11). Which is to say, all legitimate authority, including the authority by which Pilate condemns Christ, comes from God. Were Pilate’s authority illegitimate (as was Herods and as was that of the crowd that sought to stone Him), he would have had no power over Jesus.

But then, another interesting point is that Pilate, of his own authority, doesn’t want to condemn Jesus. He is obliged to do so by the threat of the mob; the people. Note that Caiaphas had no such pressure, but rather orchestrated it. Secular authority is never as secure as it seems, and ultimately is always handcuffed by what the people will allow (call it consent of the governed if you like). It is, therefore, the people who condemn Jesus, using the legitimate government as their instrument.

Again, Christ is standing in place of mankind as a whole, taking on our sins and giving satisfaction for them. Therefore, He must be condemned by those who have the right of judgment.

And what is He condemned of? First blasphemy, by the priesthood, and then sedition, by the government. The same basic criminal idea breathed through two contexts. The condemnation is that Christ seeks to usurp or undermine legitimate authority.

Which is the very crime that Adam committed: “ye shall be as gods” (Genesis 3:5). Indeed, it is the basic crime behind all sin, seeking to set ourselves up as knowing better than God, as ruling in place of God, as denying and undermining His authority.

The condemnation was unjust because Christ, as the Son of God, is the one man in all the world who never has nor could commit that crime. He suffers and dies in place of those who do; namely us. 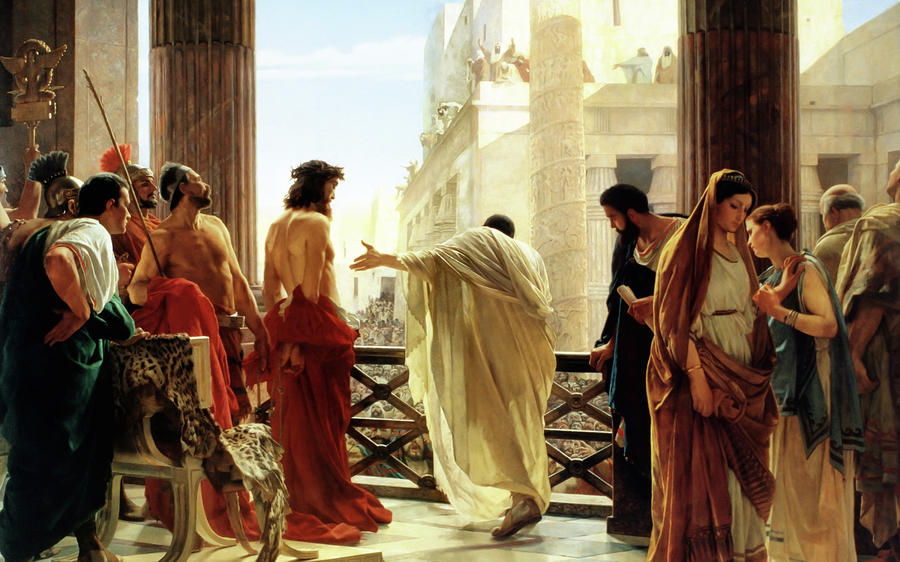