For this week, we have the introduction to one of Rifftrax’s most, ah, ‘beloved’ figures: the one and only Norman Krasner. 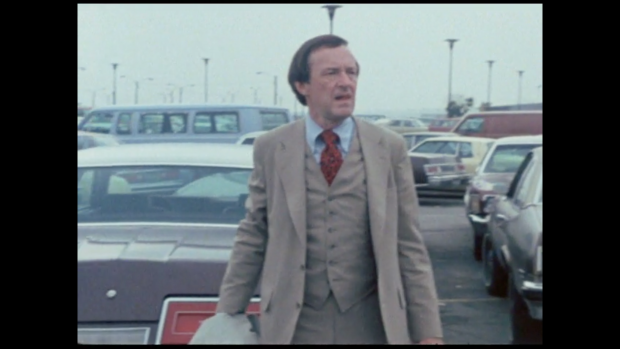 The best way I can describe the Norman films (of which four have emerged so far) is “Imagine an American take on ‘Mr. Bean,’ as written by Jean-Paul Sartre.” They’re about the misadventures of a middle-aged white-collar worker named Norman Krasner who encounters an endless series of arbitrary inconveniences and mishaps, while reacting in a way no human being ever would. Not in a funny way, you understand, just in a way guaranteed to make his situation worse, all the while looking as though he’s minutes away from sticking his head in the nearest oven.

For instance, this first short sees Norman trying to find his way out of the airport parking lot. Early on he finds that his car is blocked in either side so that he has to squeeze in between the other vehicles to force his suitcase into the back seat. Why doesn’t he just put it in the trunk? Because then we wouldn’t get to see him struggling to put it into the back. Then he might not have left his briefcase on the roof (though considering he later pokes his head out the window and looks directly at it without reacting, that might not have helped).

Meanwhile, rather than a lovable manchild, Norman’s just a sour-faced ordinary guy who seems like every cliche of the modern, pathetic mid-tier businessman living a life of quiet desperation embodied in a single figure. And you’re right: that isn’t funny. Nor does Norman give any kind of humorous reactions or exaggerated expressions of dismay; he’s pretty underplayed, and the most he offers is a despairing “Uggh….” (“Ah, yes; Norman’s beloved catchphrase: ‘Uggh…'”). Other than that, Norman never speaks.

From what I understand, the Norman series was created, along with other similar short films, as a means to fill out the time between movies on early cable channels. Apparently, they were made by someone with no sense of humor whatsoever who saw that the ‘Mr. Bean’ shorts were popular and tried to copy them like a tone-deaf musician playing a piece by ear.

This results in a perfect storm for the Rifftrax crew: Norman both never speaks, allowing them to project whatever character they want on him, and what character he does have pretty much boils down to “hapless loser.” But he isn’t even an innocent victim whom you could feel sorry for; he actively makes his own situation worse by responding in the most senseless ways or just plain being rude. This makes for a character who is absolutely ideal for roasting, and they don’t let up. Jokes of Norman being a loser, being a pervert, and being the despised plaything of the universe abound. “In the case: third-quarter sales figures, a well-thumbed issue of ‘Penthouse,’ and oddly enough, several ICBM launch codes.” “‘Your Dad is a Norman!’ became the most popular playground taunt after this film was shown.” “In a few days, Norman will have them putting lotion in a basket.”

The Riffers apparently had the idea that this was meant to be and educational film to be shown in school: a “what not to do” film, which would have made the whole thing even more inexplicable, and which prompts a lot of funny gags (“So, kids, the lesson is, never leave your briefcase on the roof of your Chrysler. Now let’s learn division”).

The short was originally shown with the live showing of ‘Manos: the Hands of Fate,’ with a few minor changes to the riffing when it was released as a stand-alone short: most notably reducing Kevin’s gag of Norman keeping his cat in his brief case to a single joke instead of an ongoing bit. But in whichever version, it’s a glorious introduction to a character who would soon become an institution among Rifftrax fans.

“Norman will be back in, ‘For the Love of God, Norman, Put Down that Gun’.”