Before going to Mass today, I brought up the Enthronement Ceremony for Japanese Emperor Naruhito, intending to watch it later, though I perused a few photos and brief footage from it. 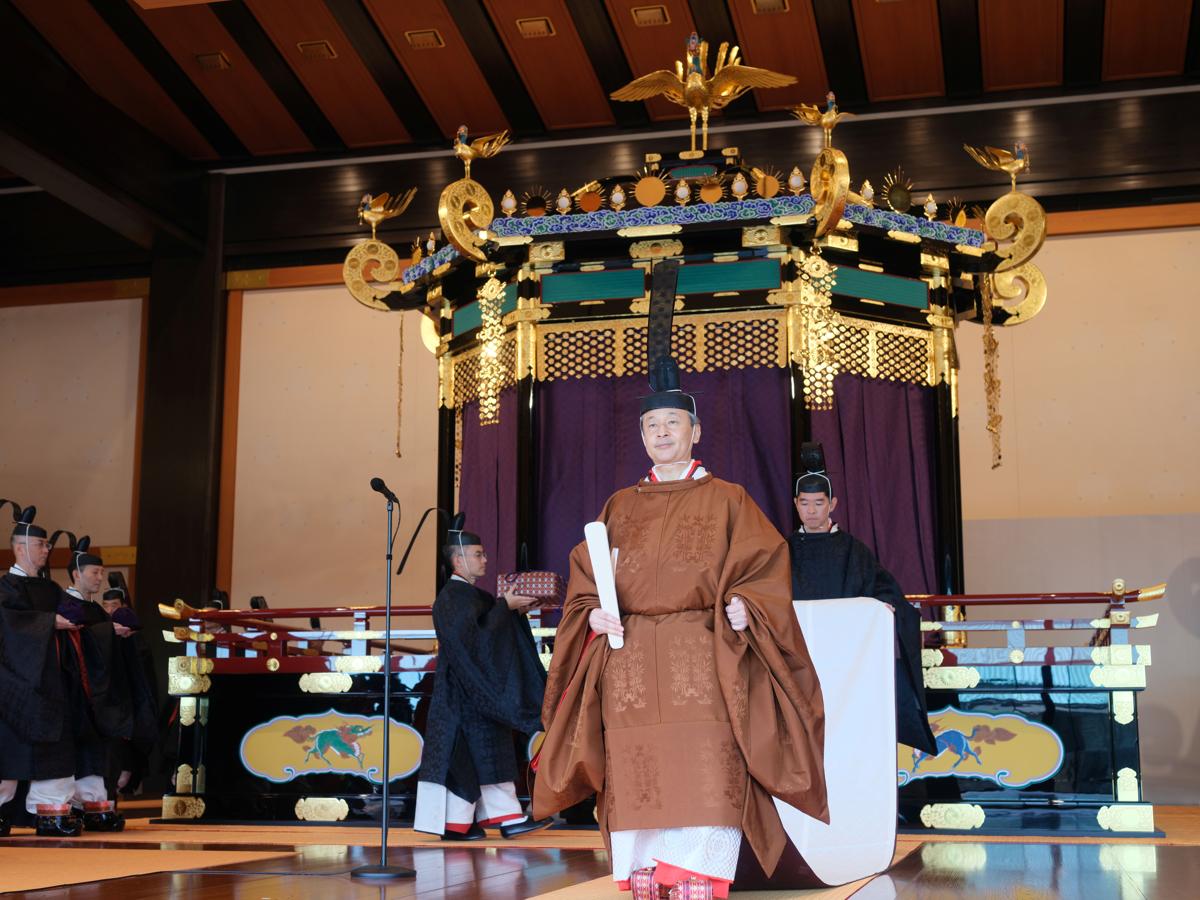 In this frame of mind, I went to Mass and a number of thoughts went through my mind. I don’t know how much foundation or antiquity these ideas have; they are my own, though naturally informed by the writings of other men. Take them for what they are worth.

First is that the Mass is the participation in the Sacrifice of Christ. In all sacrificial rituals that I am aware of, and most notably the Jewish rituals, an essential part of the sacrifice is the eating of the victim. Thus, in consuming Christ’s Body and Blood, we are partaking in His Sacrifice, which is re-presented for us in the Mass (that is, Christ was sacrificed once and for all – God sacrificed to God – but by miracle that same event is mystically presented to us in the consecration of the bread and wine).

At the same time, it is also a coronation. Christ comes to rule over us, to take His rightful place as the Lord of our bodies and souls. His minister and representative bears Him in and presents Him to us for our veneration (traditionally, we bow to the Priest as the minister and bearer of Christ as he enters and leaves the sanctuary). Which, of course, is part and parcel with the Sacrifice. A sacrifice is an act of obeisance, a sign of submission to the authority of the Deity. Even more so in this case, the sacrifice offered and the Deity offered to are one, so that in partaking of the sacrifice, we also welcome our Lord in to rule over us.

Of course, just as a sacrifice is an act of submission to divine authority, so too is a coronation. The monarch is placed under the rule of the People even as he takes his place as ruler over them. He is ‘sacrificed’ in the act of taking authority, made into a type and figure of the people themselves. Which, of course, Christ also did in His Passion, becoming the new ‘type’ of humanity; Man sacrificed on behalf of Man to God, and God to God.

Here we’re touching on what I find to be a key theme in theological and philosophical matters; that as you approach the Divine, distinctions break down. Rather than reducing things into ever more precise and ever smaller taxonomic categories, apparently distinct things blend together into a common and irreducible whole. Sacrifice and Coronation are revealed to be, in fact, a single thing that we experience under different forms; namely, the submission of man to the Divine and the elevation of the individual to the archetype. The more you really look at God and Man, the more that apparently distinct things – male and female, individual and society, authority and obedience – blur and reveal themselves to be parts of a singular whole. This is what we should expect from Christian teaching, which holds the God is absolutely simple (in the sense that He has no ‘parts’; He is what He is), and that His act of creation is a singular, coherent act; not like how we build something where we say “I want it to do this, which requires this, but then I’d need that to compensate for the other…” For God, His action is absolute and simple; a singular, coherent whole of which we experience a little bit at a time. Thus, when we speak of His Wisdom, His Wrath, and His Mercy, we’re not describing distinct moods or acts of His, but rather how His singular nature strikes up against us in this particular moment.

We’re getting into very deep water there, which I’m not really qualified to navigate. To return to the Mass coronation and sacrifice, the core of it is, of course, the Consecration and distribution of the Eucharist, which is the actual participation in the sacrifice and ascension of the King. The ritual in the lead up to it is, like all such things, a matter of context. In a coronation, the pageantry and speeches, the ritual of it, is meant to place the king in context of his nation and people. A coronation must be done according to ritual, the repeated, traditional pattern born out of history, because a people are their history and their traditions (again, definitions turning to simplicity; a ‘nation’ cannot exist without history, religion, language, customs, and so on). The oaths, the speeches, the ministers are all a matter of context; recalling to the King and to the people what he is and what they are.

In the Mass, we begin with prayers confessing sins and begging pardon, then to proclamations of God’s absolute and singular sovereignty, then to the readings from Scripture, all meant to prepare the mind and heart to receive the Lord, recalling Who and What comes to rule over us, Who and What is sacrificed and Why. The Homily is meant to clarify the readings and other teachings. It is the human touch, the one thing which the priest himself contributes (for you can’t have a purely structured system; you need a man’s judgment and presence to ensure it works ‘on the ground’ as it were). This is followed by the Creed proclaiming the content of our faith, then petitions, then the consecration itself. Finally, just before the presentation and distribution of Our Lord Himself, the recital of the prayer that He Himself gave us. Then, after the distribution is the final blessing and (in the old form) the recital of the preamble of St. John’s Gospel, the most complete and concise summation of the Christian faith in Scripture. It is all a singular event directing to that union with Christ which is at once the participation in His Sacrifice, the reception of Him as King, and the being taken into His being.

You see, it is a singular event, but one that we can’t describe fully, so we have to ‘tack back and forth’ as it were, describing it now this way, now that. Pretty much all the things of God are like that; you can’t fully describe them in a single definition, you have to now emphasize one side of it, now the other, and always aware that you’re not getting the whole in. That is one of the signs that you’re really dealing with something of God. Real, natural things don’t fit into easy formulas; does the lover or the beloved command greater rule? But the more the lover loves, the greater the beloveds hold over him, and the more the beloved desires to be loved, the greater the lover’s hold over her. Is the individual or society supreme? But society can only exist through individuals, and is only as good as its constituent parts, yet the individual cannot survive or even come into being without a community and typically reaches his full realization only in the context of communal service. The greatest men are those who give of themselves in service.

The riddles of God are wiser than the formulas of men.