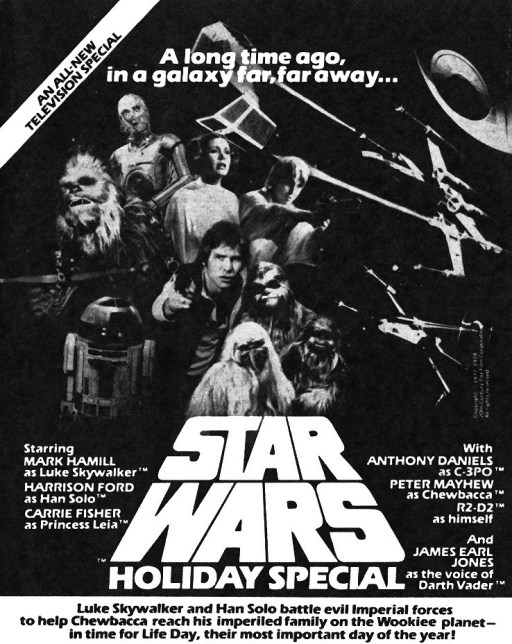 One of my personal holiday traditions is to open the season with a viewing of The Star Wars Holiday Special, courtesy of Rifftrax (I’m not insane enough to watch it ‘pure’. People have died that way). In case you haven’t heard of it, the year after the first Star Wars became a sleeper hit, someone had the idea that the way to keep the Star Wars interest alive was…to put on a holiday variety show, including musical numbers and a line of guest stars. It’s a charming, low-key family-friendly program that includes such delightful scenes as a musical number by Jefferson Starship, a holographic acrobatics show by dancers in bizarre costumes, and Chewbacca’s aged father watching a porno film given to him by Art Carney.

You think I’m making that up? How could I make that up? How could any sane person not drugged out of their minds have possibly made that up? In their defense, that seems to be exactly the explanation behind the special: everyone was high as a kite. Carrie Fisher in particular is visibly unsteady on her feet, while Mark Hamill is buried under tons of makeup to cover up injuries from a recent car crash and Harrison Ford can be seen loosing interest in the special as it goes on. Interestingly, the established Star Wars characters actually have very little screen time: Art Carney has a much bigger role than any of them, and it’s mostly just Chewy’s family hanging around their house growling at each other in un-subtitled gibberish (and, again, watching porno films). The whole thing is just…strange. It’s worth watching at least once just to gawk at the sheer madness of it all.

All that said, I will say it has one or two good points. Most notably, of course, is Bea Arthur’s surprisingly effective sequence as the owner of the Cantina bar. She gets a few laughs from her deadpan delivery and actually decent material. I really liked her reaction when the Empire’s curfew forces her to shut down her bar early: it creates a real headache for her and she has to exercise some tact to follow the rule without alienating her customers. She also lends some real emotional weight to the scene where she bids her staff goodnight. The whole sequence feels remarkably honest and human considering all the insanity going on around it.

On a related note, I like that we actually get a view of how the Empire looked from the point of view of the ordinary people in the galaxy. There is a real sense of the characters having to tiptoe around the Imperial troops and maintain a low profile or pay the price. Incompetent as the special is, it really does create a sense of people living under an oppressive government and making the best of it. In other words, it does a better job of conveying a sense of danger and consequence than the prequel films did, which never convinced us that there would be anything lost if the villains triumphed.

I also rather enjoyed the commercials included in the Rifftrax version, including a few short newsbreaks. I find that sort of thing fascinating; like going back in time.

You will note that I’m citing the commercials as one of the highlights of this special, which gives you an idea of how painful it is. Of course, Mike, Kevin, and Bill turn all that pain into sheer entertainment (“Finally, the humans are gone and the twisted, depraved rituals of Life Day can begin!”), and I think it’ll remain a staple of my holiday viewing for a long time to come.